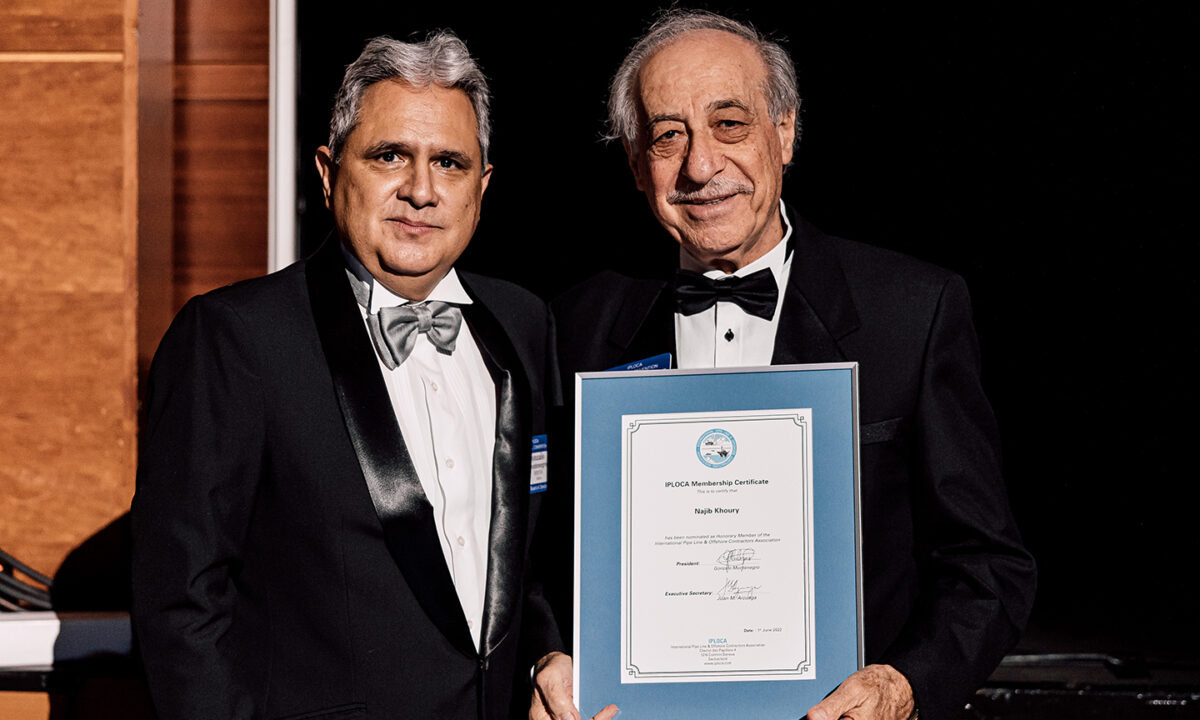 One of the highest honours that IPLOCA is able to bestow on any individual is that of Honorary Member. In order to receive this honour a person must have performed distinguished services to the onshore or offshore oil & gas industry and/or to the Association.

Najib Khoury is a previous Board Member and a Past President of IPLOCA and has clocked up many years of service within the industry. His journey with IPLOCA started when the Annual Convention was held in Athens, Greece in 1984. Since then he and his wife, Nawal have attended all the conventions except two: one in Boston in 1987 and the other one in Mexico in 2017. He served on the Board of Directors from 2008 to 2016, 2018 to 2020 and 2021 to 2022 and was elected President for 2013-2014.

After graduating from the AUB (American University of Beirut), Lebanon, he started work for ARAMCO in 1965 in the Ras Tanura Refinery in Saudi Arabia. He resigned after ten months and moved to Kuwait to work for Nalco Chemical Company. The focus was on the chemical treatment of water, oil and gas against scale, corrosion and fouling, starting from the wellhead to all distribution systems and process equipment. Such work required intensive travel in the Arabian Gulf countries where crude oil production was in remote and difficult desert areas and some in offshore facilities. Najib explains, “It was extremely challenging work in open areas under temperatures close to 50 degrees centigrade. In order to be able to operate in Kuwait it was a must to have an agent. CONCO (CCC) was chosen as our sponsor. Offices and other facilities were provided by CCC in Ahmadi and other locations.”

In 1967, Nawal and Najib got married in Kuwait. Said Khoury, President of CCC, was their best man and Najib’s mentor. Their daughter Nadine was also born in Kuwait, and then a few years later they decided to move to a European country. In 1975 Howe-Baker Engineers, based in Tyler, Texas, U.S.A. offered Najib a good position in their newly established office in Athens, Greece. During that period, CCC had moved its headquarters to Athens as well.

Najib commented, that one of the advantages of being a member of the IPLOCA family is one’s exposure to many different nationalities and thus different cultures. He remembers, “In 2000, during one of the conventions, CCC and NPCC decided to throw a big party in the middle of the desert. Local costumes were provided by us to around three hundred couples (600 people) who were transported to the vast desert in Dubai in four wheel drive jeeps. A true Arabian Adventure with camels rides, tents, sand surfing, fortune tellers, henna hand tattoos and…. belly dancers. Fourteen years later, during my Presidency, we repeated the same adventure in Abu Dhabi. In addition to the above, at that time there was the Ferrari World in Abu Dhabi, the only Ferrari-themed amusement park in the world. The iconic roof of Ferrari World is modelled after the side profile of a Ferrari GT. Guests enjoyed thrilling rides, exciting attractions and themed stores. Our two grandchildren, Sahara and Shaw, were there and to-date they still remember it.”

“It is a great pleasure for me and my family to be elected as an Honorary Member of IPLOCA. We both treasure time spent with our living friends and feel sad when we remember the ones that have been lost.”

In 2022, the company was distinguished for global equipment manufacturing and exporting activities, becoming a third-time recipient of the Oklahoma Governor’s Award for Excellence in Exporting. Vacuworx has been welcoming new equipment dealers and strengthening…

MAX STREICHER S.p.A. was selected by Gaz-System S.A. for the construction of two gas compression stations near the Polish municipalities of Goleniów and Gustorzyn in October 2020, as part of the Baltic Pipe Project, the…

SICIM Expands its Footprint in Mexico

SICIM has recently increased its portfolio in Mexico with a new contract acquired through its subsidiary Constructora SICIM. This contract constitutes a key to the strategy of the CFE investment plan, aimed at increasing the…